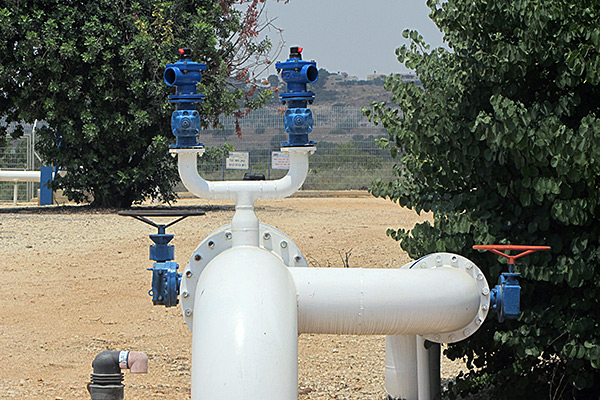 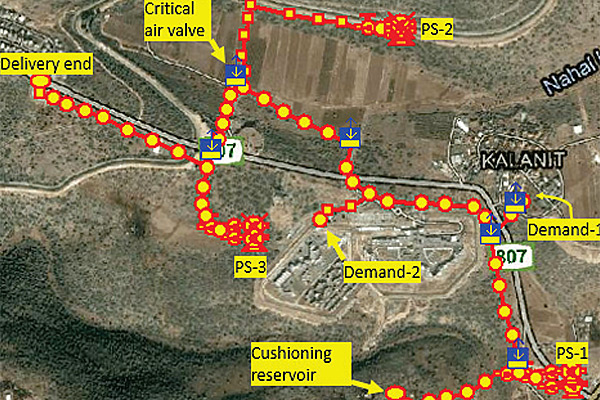 System Description.Kalanit Pipeline System (KPS) is a groundwater collection system, pumping water from three different deep well pump stations to a common reservoir that serves the drinking water needs of large settlements near Sea of Galilea, Israel (Figure 1). There are direct tappings on KPS for supply of drinking water to two different settlements along the way. KPS is owned and operated by the Israeli National Water Company “Mekorot” and comprises 12 km of ductile iron and covered steel pipeline ranging from 250mm to 800mm diameters. Ground levels vary from 45m below sea level (-45m) near pump station to 66m above sea level (+66m) at delivery end. Figure 2 shows general arrangement of pumps and associated valves at typical deep well pump stations on KPS. There was no explicit surge protection on KPS except for the ordinary kinetic air valves that are essential for normal operation of pipeline. KPS has experienced repeated damages at several locations along the pipeline and over a period of time and most of the incidents were associated with the pump trip condition at pump station 1 (PS-1). In particular, repeated damages occurred at the air valve marked as critical air valve on Figure 1.

Attempts were made to provide additional surge protection by way of a connection to a nearby existing elevated storage reservoir (mimicking a one-way surge tank connection). The storage tank is located at an elevation of +43m about 2km from pump station PS-1 and received water from other pumps located within PS-1 area through a 500mm pipeline. Temporary arrangements were made to connect this storage reservoir to the delivery side of PS-1 pumps through a check valve so the potential for extreme negative pressure conditions at pump discharge could be reduced following the pump trip event. Though this arrangement has helped reduce the severity of pressure surges at critical locations, damages to the pipeline system continued. Since all the air valves on KPS were ordinary kinetic air valves with 100mm nominal inflow and outflow orifices (along with an automatic air release valve for removing residual air), it was suspected that air slam could be the reason for repeated damages to the pipeline systems and a comprehensive modeling study was undertaken.

This is a summary of the article. You can read the whole article by clicking the link below